A deer owl, I guess?

I managed to photograph Pio's winter gear when we still have some snow, yay <3 She's a doll that I always photograph outdoors, because indoor shots just don't suit her: 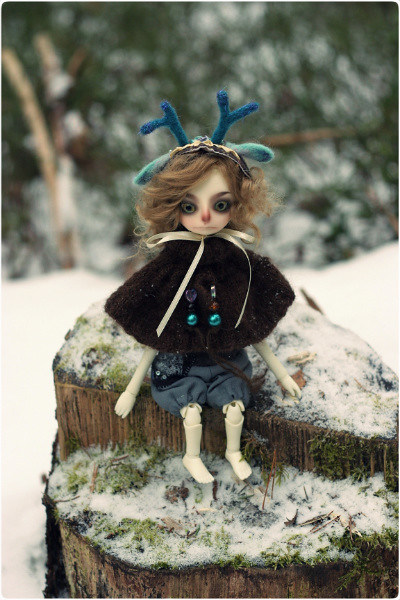 Her headwear is made by my friend Illves who sells them in Etsy as well :3 Pio's character is a sparrow owl, but I guess magical forest spirits can wear almost whatever they like. She's (he's? it's?) such a fun little doll, one of my favourites.

Email ThisBlogThis!Share to TwitterShare to FacebookShare to Pinterest
Labels: outside, photoshoots, Pio

How I change / place BJD hands 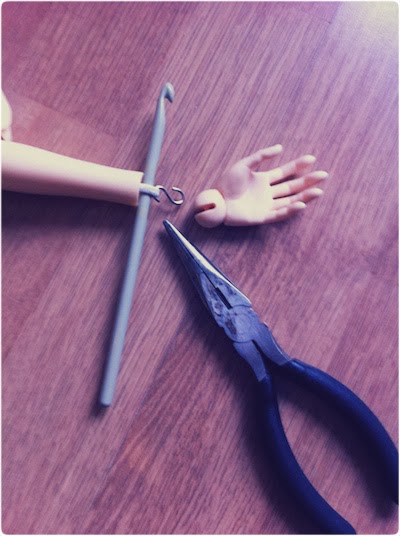 iPhone quality but yep. It's so very important to always "stop" the elastic with some thin object when you restring in case you lose your grip - you don't want a s-hook in your eye :B I usually use a pen, a chopstick or in this case, a large crochet hook. After placing the stopper I use pliers to add the s-hook and then I place the hand, using pliers to keep the s-hook stable. I always use my pliers when placing the hooks and pulling them. Easy-peasy!

Email ThisBlogThis!Share to TwitterShare to FacebookShare to Pinterest
Labels: tutorials

Happy Valentine's Day to all my blog readers! Actually we call it "a friend's day" in Finland so I went with that theme. Gris and Gert are each other's best friends despite occasional drama especially when it comes to sharing food. Well, that's sisterly love for you I guess? The miniatures are from Re-ment.

p.s. I updated my Etsy store a little bit with two new hats, going with an earthy brownish theme this time. I'm trying to seriously reduce my yarn stack, my yarn box is seriously overflowing...and yet I bought some new yarns from Tallinn again. Can't help an addiction, I guess xP

Roses for the tiny dragon

I recently finished yet another craft project: a new dress for my little Lami, Apsu.

The pattern was simple, but this still took a while because of all the embroidery. The symbol is called "the dragon's eye" - I picked it because it was easy to create and Apsu's character is a half-dragon. I used this tutorial to decorate the bodice, it's one of my favourites.

Apsu's new Mehiart eyes, pink like her aunt's! (Meital) She has some scale pattern around her eyes too. I should glue some eyelashes on...

And a shot "behind the scenes" :D We have a small apartment so there simply is no room for a permanent doll studio - so I use a foldable reflector, stool and some boards I looted from a previous job. They go nicely behind our bookshelf when not in use. A good tripod is also very useful! This setup is easy to build where there is most daylight available and to store afterwards. I wouldn't mind having a permanent setup but it's not possible right now. Maybe in the future when we have a bigger home?